For this TriJam... I made a Discord for TriJam! Please join!

I discussed this briefly with Rocknight Studios on their Twitch stream the other week. They said they didn't have time to setup and run another Discord server, but that a community-created TriJam Discord would be great and that I was welcome to create one, so I did.

This Discord server is free and public to all TriJam participants and interested parties, and I'd love to see you all join. A server is nothing without its members after all!

You can join the Discord server from the above widget or this link: https://discord.gg/DScpGwU

The Discord is big and fully-featured, though of course currently empty. It has channels for all sorts of game dev discussions, memes, hall-of-fame for TriJam winners, all that stuff. It's designed to be grown-into.

The main feature I'm really proud of and worked really hard on (and that took all the time...) is a Discord Bot I built specifically for the TriJam server! It's a work-in-progress and I intend to add a lot more features, however right now it handles greetings, filtering language in chat, some fun silly commands like telling jokes, and there's a small chance that it may post a random meme or animal picture after every user post.

The main hurdle is hosting the bot 24/7. The bot works perfectly as-intended when I'm online with it running from my machine (a laptop), but my computer can't be the source of the bot, as I'm frequently offline, away from the internet, on crappy internet, or frankly just don't want an extra program running in the background.

There are some methods for freely hosting the bot, namely with heroku, but of course there are drawbacks to each one. I'm honestly fine with paying to host it properly with AWS or some similar service, however I need more time to figure out that part of the project.

The core Discord server was created in well-under 3 hours, but I did spend more than 3 hours on the Discord Bot I made specially for this server, and I consider the bot's development separate from the server's development generally as creating the server vs. creating the bot were just two entirely different tasks I was in different modes for.

This was my first Discord Bot ever, and my first time seriously using JavaScript. I just barely touched JS in high school years ago, but web development never interested me, so I focused on C/C++, Assembly, and game development instead.

The bot's horrible code is entirely open-source and available for download below. It's currently all in a single JS file, and honestly that probably won't change. Organization is not a priority for me on this project; I just want it to do what I want, which the bot has been very successful at so far!

The server is not expected to receive any systemic changes in the near-future, but there's a lot to do! I need to setup some additional bots, post more in various channels, and do a lot of extra work for the Discord Bot, which I'd like to carry as much of the server as possible. I have big plans for it, not all of which I know for sure is even possible for me... The ideal would be having the bot auto-post whenever someone submits a new game to the TriJam, but this is very difficult and very possibly straight-up impossible for the bot to do.

Regardless, here's my current checklist of tasks to implement for the bot/server, in vague order from most-important/desired to least important:

This is awesome! Thank you and looking forward to seeing how this evolves! 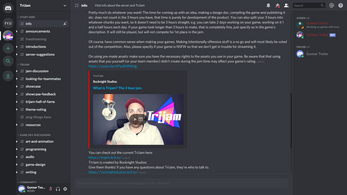 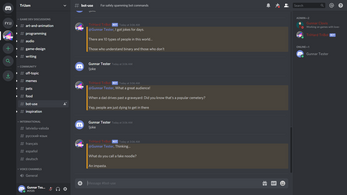 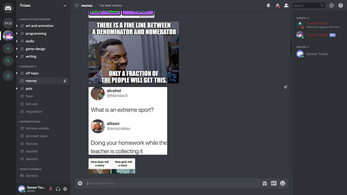 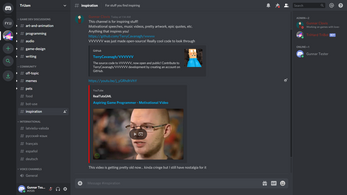 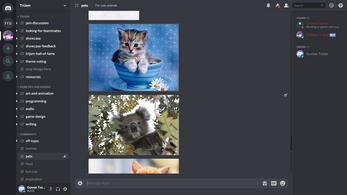 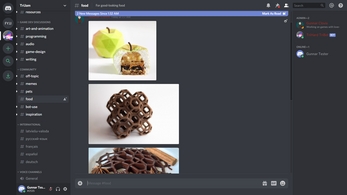