A microgame of one of my life experiences

Many years ago, when I was a teenager in California, my parents and I were set to leave for something or other. But when I went into the garage, a hummingbird flew inside, and immediately attempted to leave by flying to the top of the garage, where there was a semicircle window looking out into the blue sky. The little yellow-green hummingbird, obviously unawares of how windows worked, tried to fly through the window glass, and tried again, and again, and again. She quickly gave up, and settled down on the narrow sill, staring out the semicircular window.

It was clear that the hummingbird was not making any attempts to fly downwards, towards the car and us humans, which was necessary in order for her to escape. She needed to fly just a few feet down and go around the open garage door suspended in mid-air, but unsurprisingly she did not realize this. We couldn't leave the garage door open indefinitely and hope she eventually figured this out; we had to leave, and had to seal the garage, of course. It was hot as well; even I was quickly becoming dehydrated. I couldn't imagine this tiny hummingbird surviving for very long in the grand scheme, trapped on this high garage windowsill facing the blinding California sun in 100+ degree weather without food or water. Not to mention, she was undoubtedly needed by her presumable eggs or babies.

I tried to spook her with shouts and claps and jumps, to coax her off the windowsill, hoping she might fly off, flutter around in panic, and notice the escape route from whence she came through the open garage door. This didn't work. The windowsill and this hummingbird were very high up, easily 15 feet, if not 20.

After some deliberation and analysis of the tools at my disposal, I set up a ladder and grabbed two brooms, hoping to reach the hummingbird with the ladder and brooms, and gently cup her between the brooms to escort her out of the garage. The first ladder I tried wasn't tall enough; she was very high up. I grabbed a larger ladder, and found that I could barely reach her even with the brooms and optimal ladder placement.

I tried my plan, and it immediately showed promise: I was able to scoop up the hummingbird, gently cup her between the two brooms, and begin to carry her down to go around the suspended garage door. However, she flied off. I tried again, and she acted the same.

After much experimentation, I found that the best way was to use only one broom so as to maintain a steadier hand and safer balance on the ladder; I used the longer and lighter of the three brooms at my disposal, and worked to rescue this hummingbird.

It was hot, in dry 100 degree California weather in a hot garage on a ladder up where the heat rose. It was tedious. She kept flying off every time I got her. She would sit on the yellow bristles of the broom when I gently pushed the broom up to replace the sill, and allow me to carry her down a bit. But once I moved her down two or so feet, she started to not see the blue sky outside the window, and panicked, flying off the broom and back up to the sill. It was annoying, and slow, and frustrating, and thankless. My parents let me continue the task, though they recommended I give up a few failed minutes in, and many times after that.

It took the better part of 45 minutes, but I eventually through sheer tenacity was able to tire out the hummingbird enough so that she stopped flying off the broom at the slightest movement, and let me carry her down, around, under, and out the garage door. Once I had the broom positioned underneath the hanging garage door, showing the open world outside, she flew away into the wilds. It was over in an instant, with no reward other than my own happiness and self-satisfaction at saving the small, stupid life of an animal. And of course forever having this story to humble brag about.

I have a short clip that my stepmother recorded of this task, showing a quick snapshot of the endeavor:

It's not a particularly exciting or surprising story, but it was an odd experience in my life that I'll likely never forget. It was hard and tedious and annoying, but I was proud that my patience and tenacity (or if you prefer, stubbornness) was able to overcome this problem.

This microgame depicts this experience, I believe, very accurately. It's quiet—no music or sound—as this is not a loud and exciting task. It's boring and tedious and feels arbitrary. That's how it was in real-life. However, this is of course a much less aggravating experience, taking only a few minutes to complete and not 45. I could certainly stretch it out and make the hummingbird's behavior more realistic (e.g., flying off the broom at much less provocation until you tire it out through sheer force of will), but I knew no one wanted to play that.

Click the yellow bristles of the broom to begin. You should see the mouse cursor turn to a handpoint when it recognizes your mouse. If it doesn't, reload the game. That would be an HTML5 focus issue.

You're on a ladder to just barely reach the garage high window where the hummingbird sits, and your only tool is a broom. You must gently scoop up the hummingbird, letting her calmly sit on the bristles of the broom while she doesn't really realize that she's being moved, and ever so slowly carry her down to below the open garage door, and then shake her off the broom.

Gently pick up the hummingbird. She won't always latch on to the broom, and she'll be randomly picky about her desire to remain on the broom, often flying off and batting against the window or ceiling.

The game is tedious and annoying and repetitive and quiet and simple and frustrating and thankless—as it was in real-life—however it's not so terrible as to eat up too much time. With some patience and a steady hand, you should be able to set the hummingbird free within a few minutes of play. The real-life equivalent took 45 minutes and was much more frustrating, but I didn't think anyone would want to play that.

With the theme: Save a life

And the bonus challenge: Design a game that tells a story from your life.

This game tells a story from my life where I worked stupidly hard to try to save the life of stupid hummingbird, and by extension the lives of her children. The hummingbird was very stupid, but you can't be too hard on her for it. Her brain weighs 0.0052 ounces. An almond weighs 0.1 ounces. Not her fault.

This was made in GameMaker Studio 2.3. All assets were made inside GMS2.3 in a little over two hours.

This is cool that you made a game based off a real life experience! 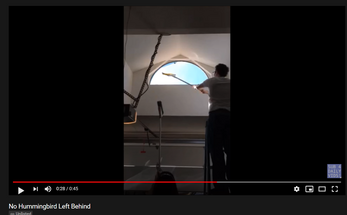