Find the love of your life at Fujikawa Academy!

See Preferences for many options!

Remember that you can use the Save/Load system!

If you're having trouble with scaling, try maximizing the game window! Try pressing F11 to fullscreen the application!

If you're having problems with performance, try downloading the game for your local machine! The music seems to really be struggling with HTML5 in-browser, so you can try the local Windows/Mac/Linux builds for an easier time!

I had a ton of fun making this game! It's very silly and stream-of-conscious as you can probably tell!

This game was made in 3 hours for TriJam 50, where the theme was "Not the game you think it was". This game also fulfills the bonus challenges of mouse-only controls (not hard for a VN) and having known movie/game Easter eggs!

This was also made in the time-frame of Weekly Game Jam 128, whose theme was "Camouflage". This theme also applies to this game in one of the story paths, but I won't spoil how...

This game was made in RenPy! All scripting and code was done by me in the three hours! The music was also done by me!

The alarm clock sound effect is a public domain SFX from: http://soundbible.com/1787-Annoying-Alarm-Clock.html

The background art is by Konett, available for free use here:  https://konett.itch.io/modern-visual-novel-backgrounds licensed under CC BY 4.0: https://creativecommons.org/licenses/by/4.0/legalcode

I got stuck clicking for about an hour until I just skipped, you are a mastermind. lol

Lol. Thanks for having a good attitude about it. I've always felt bad about the clicking part; I thought it was a really obvious troll from the start, especially after the text about how time was running out for the game jam, but a lot of people over the years have seemed to fall for it completely and get mad that nothing else happens haha...

Thank you so much! This was just a really dumb old project for me in a 3 hour game jam, made as an excuse to learn Ren'Py. I wrote the silly moronic script in just an hour, stream-of-consciousness in a rush for the deadline. Pretty much my dumbest creation ever, just a troll piece mainly, but it always held a place in my heart.

People have actually been requesting a full version of this, which I'm not opposed to. I'd love to return to this dumb game concept and make it into a full Steam game with some 50K words, multiple full routes, etc., but I work a full-time job as a Game Designer on serious games haha... So finding time for indiedev is tough.

Anyways, thanks again for playing!

you have mad potential

literally can't wait to see what else you put out

Thank you so much! That's very kind of you to say, especially on this game of all my games haha...

its not even a game its just text

Yes, it's a visual novel, as tagged and labeled. Visual novels are novels (or shorter fiction) presented as software with visuals, usually anime-style artwork, that typically feature minor interactivity through choose-your-own-adventure-style branching narrative choices or dialogue trees, with varying complexity. Visual novels are considered a subgenre of video games, along with other interactive fiction that lack visuals, but they lack real-time interactive gameplay.

This game was a dumb microgame project made in under three hours for a game jam (as an excuse to learn Ren'Py), with the script written in under one hour (the other two hours were spent learning Ren'Py).

I ahve a couple of questions.. please answer

Thanks again for making and sharing this so I could see the video !

I was hooting and hollering the whole time. I want a full game like this lmao

Thanks again so much for posting this here! I'm so glad you enjoyed this quick little project haha... and yeah, I might be interested in coming back and making something more complete

Ren'Py doesn't run very well on HTML5, especially dependent on your browser and machine. Try downloading a local executable if you didn't already, if for some reason you still care.

I got to like 1000 clicks and it just stopped

I have a question: Is there anything more after the clicking minigame or is it infinite? If it does have an end, how many clicks you need to do to finish it?

No, there's nothing else after that besides dialogue at certain numbers of clicks, but the dialogue isn't good/important. It's just supposed to be a goof leading you on. And the TriJam theme was "Not the game you think it was", so I wanted to change the game from a visual novel to... a... "clicker game". It was done in like the last 10 minutes of the 3 hours haha! I couldn't even test that part before the time ended.

I thought it was really clear that that was an infinite loop, but playtesting has reported that it's not. I'm really sorry about that 😓

Thank you so much for playing!

ALL sounds are extremely glitchy

Yeah, the RenPy web export feature is in beta and the JavaScript does not handle audio well. There's nothing I can do about it unfortunately. No one has had this problem with the download versions so far; you can download for PC, Mac, or Linux.

This was silly and funny and made me laugh more than a few times.

This made me laugh out loud. This is the exact kind of stream-of-thought nonsense that comprises my sense of humor. The worst jokes honestly were where the game tried to parody anime and visual novel cliches. It was just a little predictable.

I played the web version which had multiple issues, but didn't impede my enjoyment all that much. I'm up to 2000+ clicks in the clicking contest and nothing is happening.

Any chance I could get a hold of the source code?

Yeah, I agree, but I felt like those were necessary in order for the weirder, sillier endings to have the same impact. It's all stream-of-consciousness rushed silly nonsense, though, to be achievable in the three hours.

And yes, the web version runs really poorly... JavaScript is not handling the music well... but the RenPy HTML5 web export is in Beta and there's little I can do about it. The local machine versions run much smoother.

The clicking is infinite, they just say some dialogue at certain points. The jam theme was "Not the game you think it was" so the idea was that it turned from a dating sim to a "clicker game"... also it's punishment for picking the most boring normie anime ending haha... I thought I made it clear that that was an infinite loop with the dialogue before and during the clicking loop, but the feedback has been resoundingly confused by that, which is totally valid. That part was the last thing I did for the game with like 10 minutes left on the clock before the three hours ended; I couldn't even test it prior to finishing.

Sure, the source code is available as a download now. I didn't do that earlier because 1) I'm ashamed of it and 2) each executable zip took like 10 minutes each to upload and I was in a rush. The LoveAtFujikawa_Source_TriJam50_RenPy.zip contains all code and assets used in the project, completely compilable with RenPy.

Here's a fun thing: you forgot to remove the uncompiled scripts from the regular executable. They're all still there in the version I have.  Still, thanks for making a separate download. I wish you all the best!

Haha! I guess that's just a RenPy thing then. Though I'm pretty sure the scripts don't compile... It's a Python-based engine after all, it's all interpreted. 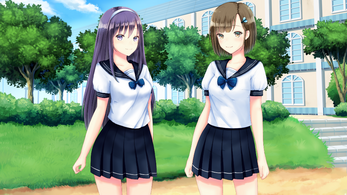